I can hardly believe myself that it’s just about one year ago when the CQ Worldwide DX SSB Contest 2011 got me into contesting.
Like many hams, I had several prejudices against contests in general: No „real“ QSOs, just boring number exchanges, „blocking“ of the bands, etc. – while all of this may be true for the listener, at least the first two points change as soon as you participate yourself (at least for me). It’s not about the QSO itself (I dislike „standard“-QSOs in phone, anyway), but about the adrenaline rush when breaking a pile-up or watching the counter in the logging program go higher and higher.
In the meantime, I took part in several contests – as part of multi-operator stations as well as just for myself, so that it feels like I’ve done this for much longer than just a year.

Anyway, it was without question for me that I’d do the CQ Worldwide SSB again this year – again under the club callsign DL0TY.
Last year we had quite a team, which consisted mainly of newbies just like me, and a precise timetable. For this year, there was an unfortunate coincidence: The Interradio, Northern Germany’s biggest ham-fair, was scheduled for October 27th, the CQWW’s Saturday. Of course most hams, and thereby most possible operators, went there, so only my friend Roland, DF1OE and me were left to do the contest. Also, we didn’t manage to build the planned 40m Triple Leg antenna in time, so we „only“ had a 2x40m (half-wave for 160m) Dipole between some high trees and a 15m double quad, as always skillfully built by Stefan, DO7OZ.
And if this wasn’t enough, we ran out of gas for the heating on the first evening, so it became quite chilly.

So, the conditions of the contest station were quite far from optimum this year – but at least the HF conditions did not disappoint: 15m and also 10m were wide open and stations from North as well as Middle and South America could be worked easily, with just 100 Watts from the Kenwood TS-140S transceiver (a PA would be nice, but is out of question due to the station being powered by solar cells only).
In a break from contest operation, me and Stefan, DO7OZ could even receive KQ2H, which is a 10m FM repeater located somewhere close to New York, in excellent quality – and listen to stations from both US coasts as well as Europe talk to each other. If that isn’t fine propagation, nothing is. I even made a short video of it: http://www.youtube.com/watch?v=bQ9M8hn3Jxg

40m didn’t work too well (lots of QRM and little chance to break any pile-up), but with the dipole on 160m and 80m and the double quad on 10,15 and 20m, lots of contacts could be logged: 396 in total, to be precise, which equals to about 122.000 points claimed score. That is 23.000 points more than we achieved in last year. Given the suboptimal conditions, this makes me quite proud, because it shows there is potential for more in 2013. With more sunspots being expected for the coming year, I dare to dream of breaking the 200.000 points. 🙂 And yes, I do know that for some of the „professional“ contest stations this is still nothing – but apart from that comparison not making too much sense in my opinion, I just don’t care as long as I have fun!
And fun it was, even though doing contest operation for 2×9 hours straight was quite exhaustive – but hey, nothing comes from nothing.

I hope you liked my little contest report, and I especially hope to hear you on one of the HF bands soon! 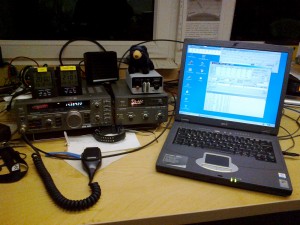